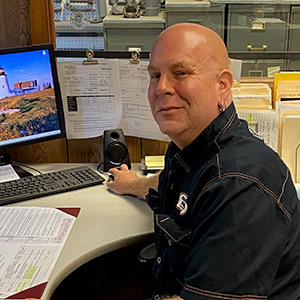 As the second generation of Taavolas at BMS, Royce has been around the broaching industry for most of his life but officially joined the BMS team in 1991. Having excelled in machinist’s skills in middle and high school he knew early on that a career in manufacturing was his calling.

Royce joined BMS at the age of 18 as part of our used machine teardown department. In this department he disassembled broaching machines of all types and learned, hands-on, about their construction and function.

Having learned all about taking broaching machines apart, the logical next step for Royce was to the machine assembly department where he would learn how to put them back together. As part of BMS’s expert mechanical department, Royce learned how to assemble machine ways and slides to closer fits and tolerances than when they were new, an attribute of all machines remanufactured by BMS.

Although Royce excelled in the mechanical department, his dream of being a metal craftsman was not completely satisfied. At his request, he was moved to the hydraulic department where he learned about all types of hydraulic systems and components and was able to better utilize his skills as a welder, tube bender, machinist, and custom fabricator.

Royce became BMS Manufacturing Manager in 2020 and in that time has reinvigorated the BMS manufacturing team with his youthful energy, vitality and attention to quality and service. Royce makes your problems his problems and endeavors to find the quickest and best solution to get customers broaching operations back on-line.