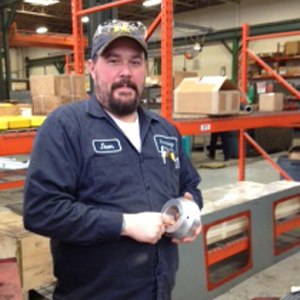 Jason joined BMS shortly out of high school where he earned a certificate in autobody repair.

His first years were spent in the rigging and machine cleaning and teardown departments where he learned how to safely move machinery and how broaching machines were constructed. Since then, Jason has spent time apprenticing in all the manufacturing departments and has found a permanent home in the hydraulics department where his consistently positive, can-do attitude is greatly appreciated.

Although hydraulics has become his preferred area, Jason is always willing to lend a hand wherever it is needed including facilities maintenance or assisting on field service calls where his cross training in all departments has proven to be a great asset in getting service calls completed quickly and effectively.

Jason’s positive attitude and willingness to do anything that is asked of him helps BMS to consistently deliver machines and On Time, On Budget and On Objectives.