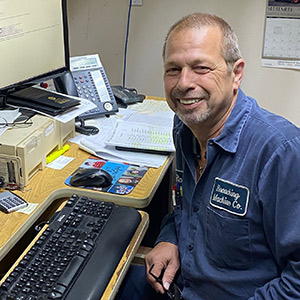 Rick followed in his fathers’ footsteps and joined BMS in 1988 in the electrical department. Rick brought 2 years of experience as a machine tool electrician with him so was able to get right to work building panels, laying out conduit, building pushbutton stations and wiring machines.

At the time Rick joined BMS, electrical relays were still commonly used, and he learned early on how to troubleshoot and repair these vintage electrical systems. A skill that serves him well when either reconditioning a used machine out of BMS’s inventory or when called on to service or repair older broaching machines in the field. As a field service technician, Rick has installed and serviced broaching machines throughout the world including several trips to China and Mexico.

Over the years, Rick has evolved with the advances in electrical components and systems. He is experienced with hardware design and is fully versed in the programming of numerous manufacturers and models of PLC including, but not limited to, Allen Bradley PLC2, PLC5, SLC150, SLC 500 series, MICROLOGIX, CONTROL LOGIX, GE Fanuc SERIES ONE, GE VERSA and LM90/30 as well as Mitsubishi, Modicon, and Siemens PLCs.

His vast experience also covers the advances in operator interfaces. Rick is skilled in programming and interfacing HMIs from numerous manufacturers including, but not limited to, Allen-Bradley Panelview and Panelview Plus, Mitsubishi GOT, Proface and Siemens.

As BMS’s machine designs evolved to electromechanically driven machines, Rick has continued to stay up to date with the latest technology. He is now highly skilled with DeviceNet and Ethernet communication protocols as well as drives and motors manufactured by Allen-Bradley, Emerson, and Rexroth. His experience and desire to learn and grow with the technology, make Rick a highly valued contributor to the advancement of the BMS machine lines and help make BMS an industry leader in electromechanically driven machines.